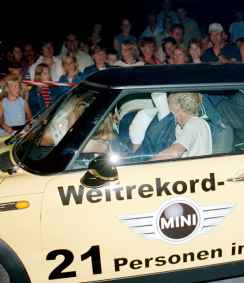 World Records for Most Persons in a Car

(If you want to break a record that is published in a record book or governed by an international authorithy, there may be other or additional rules. See here for more information.)


The car and bus cramming records are all subject to the following rules:

Because of the vast number of makes of vehicles on the road today, the number of car cramming records in this list should be reduced to a few cars only. If you want to set a record, please prefer to beat a record that is in our list. However, we will expand the list if there are interesting new claims for well-known cars.
(Note: The rules used by Guinness World Records differ from the above rules. In particular, Guinness requires a minimum age of 18 years and no person who is less than 1.525 m [5ft] may participate.]

Back to the World Record Homepage